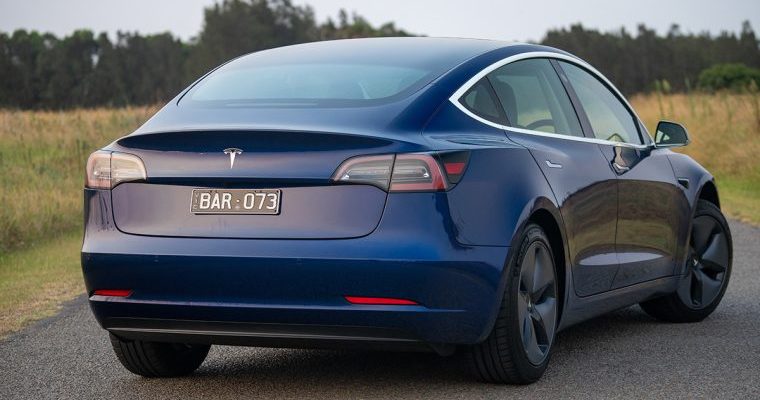 For Baby Boomers, it was hot rods and muscle cars like the iconic Ford Mustang or Chevrolet Corvette, while Gen X bedroom walls were plastered with supercars like the Lamborghini Countach or four-wheeled Hollywood heroes such as KITT from Knight Rider or The Bandit’s tyre-smoking Pontiac Firebird.

Today, Millennials share and dream about digital wallpapers on their phone of something entirely different – an electric-powered four-door family-focused luxury sedan from a brand that didn’t even exist a decade ago; Tesla.

The American start-up car maker has, quite literally, shocked the established automotive industry, and fast-forwarded the rebirth of the electric car from a flight of fantasy into an everyday reality.

But, up until recently, its full-size Model S sedan and Model X SUV have been a little far out of reach for the masses with their six figure price tags.

Jumping on the Tesla bandwagon is more accessible than ever before with the introduction of its smaller, entry-level Model 3, which arrived in Australian showrooms last year with a more palatable sticker price that starts at $67,900 (plus on-road costs) – around the same money as a mid-level executive sedan from the likes of BMW, Mercedes-Benz or Audi.

The Model 3 is, like the Model S above it, a four-door, five seat sedan and is available in three grades – Standard Plus, Long Range and Performance – with each tailored to provide varying levels of driving performance.

The Standard Plus
This is what we’re testing here. It’s the most affordable and is powered by a single electric motor on the rear axle that delivers 190kW of power and 450Nm of torque – enough to propel it from 0-100km/h in a spritely 5.6 seconds – while energy is stored in a 54kW/h battery that provides 460km of driving range.

The Long Range
As it suggests, provides maximum driving distance of 620km between recharges (which is comparable to a conventional petrol-powered equivalent sedan) thanks to a larger 75kW/h battery and dual motor set-up – one on each axle that gives it all-wheel drive traction for better safety and performance – with 258kW of power and 510Nm of torque.

The Performance
Logically, is tuned more for maximum… well, performance. It too has the same dual motor configuration and larger battery pack, but delivers 340kW of power and 640Nm of torque, giving it the ability to rocket from 0-100km in a supercar-like 3.4 seconds while still providing 560km of driving range.

All three are covered by a standard four-year warranty (but only for a sub-par 80,000km) while the battery and electric motor are guaranteed for eight years and double the driving distance.

Both the Standard Plus and Long Range ride on air-splitting 18-inch “Aero” wheels while the Performance has sportier 20-inch alloys, and comes with bigger brakes. Otherwise, all three share the same fundamental basics, which includes a generous list of standard luxury and safety equipment.

Even though Model 3 owners have a pay-per-use fee when recharging the battery pack through Tesla’s Supercharging Network (which is free for owners of Model S and Model X vehicles), the company claims users will pocket up to $5600 savings in petrol costs over a five-year period.

Plus, as there’s less moving parts in its mechanical configuration, running costs are significantly reduced.

The Model 3 does not have a prescribed servicing schedule, only replacing cabin filters and maintaining the ventilation system every two years.

Even charging isn’t too much of a chore, as the Standard Plus can be refilled on a high-speed Tesla Supercharger to within 80 percent capacity in around 40 minutes. Considering Tesla has installed 50 Supercharger stations across Australia already – and another 500 lower-voltage destination chargers – and that the Model 3 comes with a household charging cable, you’ll never be too far away from topping up.

Inside the Tesla Model 3

Even at the base level, the Standard Plus is equipped with a black ‘vegan’ leather trim, comes with the full suite of semi-autonomous driving functions in Tesla’s Autopilot system and has a 15-inch digital tablet display stacked with digitised goodies.

The screen stands out in the middle of the dashboard against the stark minimalist interior, but the functionality of it is outstandingly simple. On the right side of the display is a permanent instrument cluster that has a digital speedo, gear indicator, battery level and a real-time display of the traffic around you thanks to the myriad of cameras and sensors around the vehicle. While it isn’t directly in your line of sight like a traditional set of dials, it is just as easy to keep an eye on your speed through peripheral vision and quick glances.

The remaining two-thirds of the screen controls and displays everything else, from conventional features like the ventilation, audio system and interactive sat nav that can display Google satellite maps. But there is so much more fun stuff hidden in there – and things traditional car makers wouldn’t dare – like embedded Karaoke, Netflix and YouTube applications, full internet capability and even a host of old-school video games, all of which can only be accessed when the vehicle is stationary presumably to help pass the time while recharging the battery.

Operating the Model 3 is a simple exercise. With a digital key in your smartphone, you simply walk-up, open the door, hop-in and it’s all ready to go – with your personalised preferences for driving parameters, radio stations and the ventilation pre-set. There’s no starter button; just flick the column-mounted gear selector to D (for Drive) and you’re off.

While all that might sound a little futuristic, the driving experience is actually fairly conventional. In the default “Chill” mode, it accelerates moderately and there’s only a faint whiff of retardation when you step off the throttle, meaning you have to use the brakes as normal.

You can alter those elements through the centre display; un-corking quicker acceleration and a sharper throttle in “Sport” mode and adjusting the level of regenerative braking to the point where you can drive – mostly – with just one pedal.

The steering is precise, but a little artificial in its feedback, and it handles exceptionally well with great stability and plenty of grip thanks to its low centre of gravity and quality Michelin tyres. However, the suspension is a little harsh over patchy surfaces and could be more refined.

The driving position is well sorted with plenty of adjustment, the front seats are comfortable, there’s excellent vision and a great sense of spaciousness thanks to the expansive glass house and its full length panoramic roof. There’s heaps of storage space in the centre console and generous space for rear-seat passengers too with its flat floor. But the sloping roof line does impede head room for taller back-seat occupants.

Even though Tesla encountered serious production issues with the introduction of the Model 3, delaying its introduction numerous times and even building some in a tent that was annexed off its Californian factory to meet initial demand, our test car appeared to show drastic improvements in build quality compared to previous experiences with Tesla.

And, with that, the Model 3 is the most convincing vehicle yet from the American start-up brand. It looks smart, drives nicely, is one of the safest cars on the planet, and offers enough driving range to – almost – eliminate range anxiety.

You don’t need to spend any more than $70k either, as the Standard Plus is more than enough.