Home Driving Insights
Previous articleThe realities of long-distance driving in an electric vehicle
Next ArticleHas COVID-19 changed the auto industry forever?
- Back to all articles - 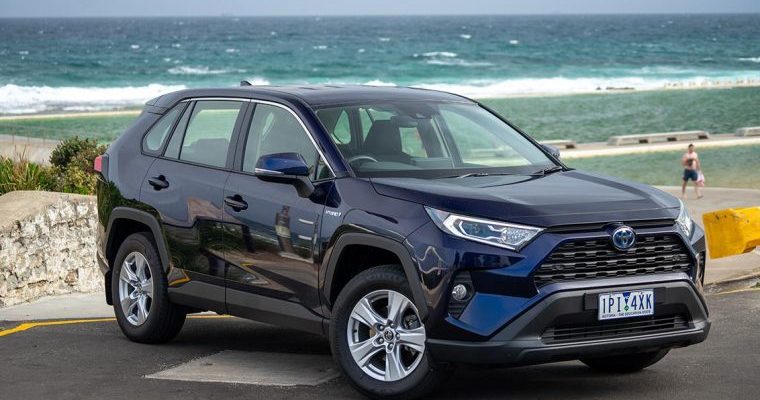 Long before SUVs became the first choice for family transport, Toyota pioneered the modern soft roader with its RAV4.

First introduced in 1995 when Australians were buying large, locally-produced sedans at a record rate, the Japanese brand is shifting the compact SUV again with the fifth-generation RAV4, which arrived in Australian showrooms in the middle of 2019 and became the first in its class to be available with a hybrid powertrain on almost every model variant.

It has also emphasised the Sport tag within the Sports Utility Vehicle acronym with two different visual characters and raised the bar for safety as every model is equipped with a comprehensive array of semi-autonomous crash-avoidance systems.

The range includes 11 different variants across four model grades with three powertrain options and the choice of either front-wheel drive or all-wheel drive.

It kicks off with the ultra-competitive entry-level GX at $30,640 (before on-road costs), with a new 127kW/203Nm 2.0-litre four-cylinder that drives the front wheels via a standard six-speed manual gearbox or an optional continuously variable automatic. The same mechanical layout is also available in the mid-level GXL and feature-packed Cruiser variants, although they both come standard with the self-shifting transmission.

Similarly, all three mainstream model grades can be had with a hybrid drivetrain that combines a lean-burning Atkinson-cycle 2.5-litre four-cylinder engine with a single electric motor in the front-drive models or two electric motors for the all-wheel drive variants. As such, the former produces a total combined output of 160kW and consumes an average of 4.7L/100km while the latter has 163kW and an average fuel economy figure of 4.8L/100km.

The new hybrid option has made the diesel-powered RAV4 redundant and is no longer offered.

Instead, Toyota has developed a new adventure-focused flagship Edge variant that features unique styling, is powered by a 152kW/243Nm version of the 2.5-litre litre four-cylinder with an eight-speed automatic and has a traditional mechanical all-wheel drive transmission that features torque vectoring control for maximum traction – both on and off the road – while its electronic stability system can be tailored to suit different terrain, with three unique modes for mud and sand, rocks and dirt and snow.

Here, we’re testing the most affordable Hybrid model, the front-wheel drive GX that costs from $35,140 (before on-roads).

Don’t be fooled by its position though as it comes equipped with a generous list of standard features, including 17-inch alloy wheels, automatic LED headlights and rain-sensing wipers while the cabin has cloth seat trim, dual-zone climate control air conditioning with rear air vents, keyless entry with push-button start and an eight-inch colour touchscreen display with a six-speaker audio system, digital radio, satellite navigation and Bluetooth connectivity. It will also be available with smartphone mirroring for Apple and Android devices later this year, and Toyota has promised that existing models – and those sold between now and then – will have their system upgraded when it becomes available.

Alongside the nice-to-haves, it also features the full suite of Toyota Safety Sense systems, such as radar cruise control, automated emergency braking with pedestrian and cyclist detection, lane keeping assistance, blind spot monitoring, rear cross-traffic alert and speed sign recognition. That is all on top of the RAV4’s cabin being fitted with seven airbags, as well as having a reversing camera, front and rear parking sensors and two ISOFIX child restraints in the 60:40 split-fold rear bench seat.

Costing far less than most of its rivals, and featuring more standard equipment, the RAV4’s value equation is hard to ignore.

And, when you take into account its running costs – with fuel consumption to rival a diesel alternative, plus Toyota’s affordable capped price servicing regime and a five-year warranty that extends to seven years if you maintain the vehicle within the Toyota dealer network – and above average residual values, the RAV4 is even more convincing.

However, it does more than just tick boxes. The cabin is spacious, with plenty of headroom and more than enough space for adults to stretch out in the back seat, and also comfortable, with excellent ergonomics, great vision, clear displays and heaps of useable storage nooks throughout. The boot is huge too, offering a class-leading 580L of cargo carrying capacity.

And the RAV4 is a great machine to drive. Utilising the same fundamental underpinnings as the award-winning new-generation Camry, as well as the critically-acclaimed Corolla and Toyota’s smaller SUV, the C-HR, Toyota has found a new sense of dynamic verve that makes the RAV4 both comfortable and enjoyable from behind the wheel.

The suspension has a nice balance between compliance and handling, the steering is well weighted with good on-centre feel, and the cabin is nicely isolated from wind and road noise – all of which create a relaxing ambience.

Best of all, the hybrid powertrain is ultra smooth, with a seamless transition between the electric motor and petrol engine that works in absolute harmony with the CVT transmission. Using only a 6.5Ah battery, the 40kW/121Nm electric motor in the front-driver provides smooth initial acceleration for short distances before the engine chimes in. Treat the throttle gently, it’s that quiet that you’ll barely notice which engine is doing the heavy lifting. Dig a little deeper, however, and while the engine provides decent oomph for overtaking but it does raise its vocal register and sounds a little thrashy at high revs.

But, all in all, the new-generation RAV4 has lifted the bar to a new level within the compact SUV segment, especially in hybrid form. So, if you’re considering the transition towards the future of electric motoring, this is a great way to start.